As the snow gives way to yet more liquid sunshine in the UK we can but hope that Spring is finally on it’s way and look forward to all this years wonderful annual Jack in the Green and Green Man related events.

Listed below are all known annual events for 2018/19 that feature The traditional Jack-in-the-Green or The Green Man throughout the UK. This list will be regularly updated on our Annual Events Page HERE. I would be extremely grateful if anyone who attends any of these events would send me pictures, videos or written accounts for the archive. If anyone knows of any events that are not listed here or if there are any corrections/amendments required please don’t hesitate to contact me.

The Fowlers Troop Jack was revived in the early 1980’s by members of the Blackheath Morris Men and friends. It is a revival of a Jack in the Green from about 1900 which was paraded by the original Fowlers Troop. In 1983 Mo Johnson made a Jack-in-the-Green in the back garden of the ‘Dog and Bell’ and Blackheath Morris (a side morphed from the Blackheath Foot’n’Death Men who used to dance at events featuring bands like Hawkwind and the Pink Fairies) revived the Deptford (Fowlers Troop) Jack. Mo was inspired by one of Thankful Sturdee’s photographs c.1900 of the original troop and Jack.

Deptford Jack in the Green

The Rochester Jack was revived in 1981 by Gordon Newton and Boughton Monchelsea Morris who were inspired from accounts by Charles Dickens. Custodianship of Jack was passed to Motley Morris in 1984 who now wake Jack with various other Morris sides at dawn on May Morning (approximately 5:32am) at the Bluebell Hill picnic area, surrounded by twelve bonfires.  Jack is paraded through the streets of Rochester usually on the bank holiday Monday as part of the Sweeps Festival.

The Oxford Jack is usually first seen near Magdalen Tower just before 6am and leads an informal procession up ‘The High’ to Radcliffe Square, where the first dance of the day: “Bonny Green” from Bucknell, starts at about 6.25am. OUMM (Oxford University Morris Men) introduced Jack-in-the-Green to their May Morning festivities in 1951. At that time they were unaware that a Jack-in-the-Green was a common sight in and around Oxford in the 19th century.

Oxford Jack in the Green

The Hammersmith Jack, is a wonderful urban Jack, largely covered with artificial foliage, although it does have a crown of fresh flowers on May 1st. The leaves are made in a variety of materials, some created by children at local schools that the Jack visits as part of its May Day perambulations. As well as leaves made of paper, fabric and plastic, the Jack has other items attached that have some significance to either Hammersmith, the team, or the person who attached it. The Hammersmith Jack is paraded through Hammersmith on May 1st, regardless of which day of the week this falls, and wherever else the Jack visits on this day. The rest of the year the Hammersmith Jack is stored at Cecil Sharp House the home of the English Folk Dance and Song Society where he sometimes takes part in events.

The Winchcombe (Gloucestershire) Jack was revived on August 31st 2009 as part of “Marking the Year.” A Jack was recorded as visiting a local school by Emma Dent of Sudeley Castle in the 1890’s. The Jack was then resurrected for May Day 2010 and a local May bank holiday village fete and is now awoken  every year at dawn (5:20am) on May Day up on Cleeve Hill by Happenstance Border Morris. The Winchcombe Jack appears at various events over the following  days.

The Bovey Tracey Jack-in-the-Green goes out with Grimspound Border Morris. He can be seen greeting the Mayday dawn up on Haytor and then afterwards puts in an appearance in Bovey Tracey.

Highworth in Wiltshire celebrated it’s 800th anniversary in 2006 with a Jack-in-the-Green and the Jack is now an annual tradition as part of the May Market. The Highworth Jack-in-the-Green parades each year through the streets of Highworth with the Bang to Rites Drummers.

Known as The Guildford Bush, this Jack was revived by the Pilgrim Morris Men in 1979 and is built from Laurel. For many years the Jack was carried by folklorist  George Frampton. The parade will commence at 10:30 outside The Star on the High Street. The Jack processes with the Pilgrim Morris Men to Castle Green where the Maypole is erected and the dancing involving guest Morris sides begins. 2016 marked the 40th Summerpole.

Guildford Jack in the Green

Ilfracombe’s Jack-in-the-Green will parade on Sunday 30th April. The Ilfracombe Jack did not appear in 2015 after the previous committee were unable to continue. Kelly Raveney stepped in to help and Ilfracombe’s May Day Celebrations returned in 2016. In 2017 the parade will be held on Sunday 30th April. The Muster will begin at 11:00am at the Pier Car Park. The parade will start at 11:30am from the Pier Tavern Pub. The route is along The Quay, St James Place, Ropery Road, Broad Street, Fore Street, High Street, Northfield Road and along Wilder Road to the Clapping Circle next to Wildersmouth Beach/Capstone. This means that not only have some of the roads changed but the parade will be in the opposite direction to previous years. At the clapping circle ‘Jack-in-the-Green’ will be “Stripped of his leafy coverings to release the ‘spirit of summer.'” This years parade will also feature a horned god giant as well as seeing the return of a maypole.

Ilfracombe Jack in the Green

The Hastings Traditional Jack-in-the-Green was revived by Keith Leech in 1983 and is now one of the biggest annual gatherings of Morris Dancers in the country.  The Gathering usually begins at 9:45am and Jack is “released” from the Fisherman’s Museum on Rock-a-Nore Road at approximately 10:15am . Jack is released in a wonderful, magical ceremony and is central to the festival and the parade. At the end of the day (3:30pm) Jack is slain to release the spirit of summer. The festival takes place over the whole bank holiday weekend.

Bristol Jack in the Green (Saturday 5th May)

The Bristol Jack in the Green appears on the first Saturday in May starting from the historic Harbourside (outside the M Shed) at 10:30am and leads a magical procession through the streets of Bristol eventually ending the day on Horfield Common at approximately 4pm where he dies to release the spirit of summer. A Jack-in-the-Green was recorded in Bristol around 1865 by a lady who remembered seeing him with a sweep and a queen on the outskirts. The revived Bristol Jack in the Green is a descendant of the Hastings Jack.

Bristol Jack in the Green

Knutsford May Day and Jack-in-the-Green (Saturday 5th May)

The Knutsford Jack in the Green is probably the oldest continual annual Jack in the Green. Apart from the war years it has paraded almost every year since 1889.  May Day in Knutsford is celebrated over the May Bank holiday weekend. The person who plays Jack is chosen each year and is now played by a  youngster rather than an adult as it used to be.

Knutsford Jack in the Green

Hever Castle in Kent have their own Jack-in-the-Green and Green Man over the early May Bank Holiday weekend. Joined by the Lord and Lady of the May on the Castle forecourt. The Green Man leads a procession through the gardens waking up the plants for summer.

The Clun Green Man Festival is a traditional springtime festival, held on the first May bank holiday weekend of the year. The Festival takes place in the picturesque town of Clun in South Shropshire. The programme is full of live music, drama, colour and medieval malarkey and is fun for all the family

Brentham has a big celebration every May which includes a Jack in the Green described as a walking talking bush who sometimes parades barefoot. Brentham’s May Day tradition became established in 1919 after the end of the First World War and expanded considerably for 1921 when the first Jack-in-the-Green appeared.

Brentham Jack in the Green

Whitstable Jack-in-the-Green (May weekend 5th-7th May)

Jack-in-the-Green is now central to the Whitstable May Day celebrations. The Jack is supported by Oyster Morris who also have their own Green Man who combines the roles of Jester and announcer dressed in white and green. Jack is also  accompanied by two attendants dressed as Robin Hood and Maid Marian. The Jack-in-the-Green was revived for the Whitstable Folk Festival in 1976. Dixie Lee, one of the original organisers said in 1992 “ At the time it just seemed like the Jack was looking for a reason to come out again, and I must say that every year when Jack makes his appearance on the street I get such a feeling of power from him that I know it was the right thing to do”

Whitstable Jack in the Green

The Yaxley Jack-in-the-Green started in 2013 and lead the Yaxley May parade. He was accompanied by Sap-Engro and Copperface as well as an attendant wearing the original Ancient Order of the Foresters sash, worn in the village’s parades in the nineteenth and early twentieth century and a host of boggarts – the mischievous imps of Fenland lore. This is now a bi-annual event so should take place in 2018. The Yaxley Jack may still be seen elsewhere on other years.

A Celebration of Harvest this takes place in September each year. The straw Jack is ritually stripped in the evening so that all present can take a keepsake and then he is burnt in a brazier. It is hoped that he will be burnt as a complete figure one year.

Twelfth Night is an annual seasonal celebration held in the Bankside area of London. It is a celebration of the New Year, mixing ancient seasonal customs with contemporary festivity. It is free, accessible to all and happens whatever the weather. The extraordinary Holly Man, the Winter guise of the Green Man appears from the River Thames brought by a Thames Cutter, Followed by wassailing a mummers play and other festivities. 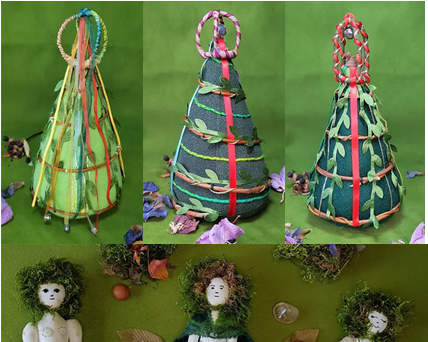 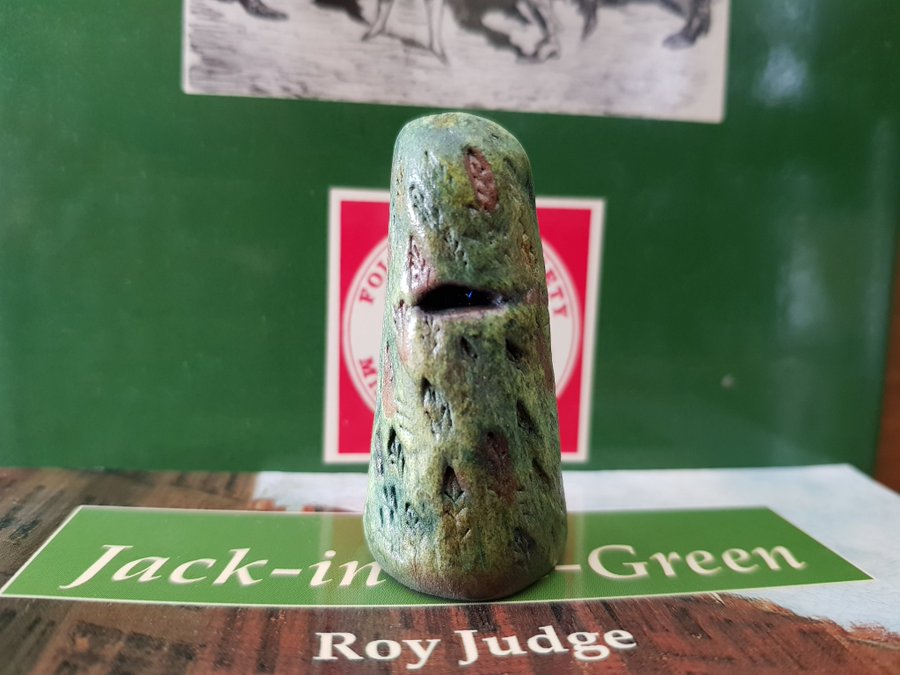